According to the Federal Aviation Administration (FAA), a Counterfeit Part is a part made or altered so as to imitate or resemble an "approved part" without authority or right, and with the intent to mislead or defraud by passing the imitation as original or genuine. (source: Detecting and Reporting Suspected Unapproved Parts, 03/13/00 FAA advisory Circular No. 21-29B).

According to Broad Industry Definion  per AS6741:
Counterfeit material is defined as "Material misrepresented as meeting the customer's requirements and has been confirmed to be a copy, imitation or substitute that has been represented, identified, or marked as genuine, and/or altered by a source without legal right with intent to mislead, deceive or defraud".

SAE AS5553 Standard for "Fraudulent/Counterfeit Electronic Parts; Avoidance, Detection, Mitigation, and Disposition" defines counterfeit part as "a suspect part that is a copy or substitute … whose material, performance, or characteristics are knowingly misrepresented by the supplier…"

Taxonomy of counterfeit parts and defects

There are different types of counterfeit parts and defects. A taxonomy of counterfeit types is given in the following figure (Mohammad Tehranipoor, Counterfeit Parts Detection: Taxonomies and Assessment, NASA QLF, 2013, Cape Canaveral FL): 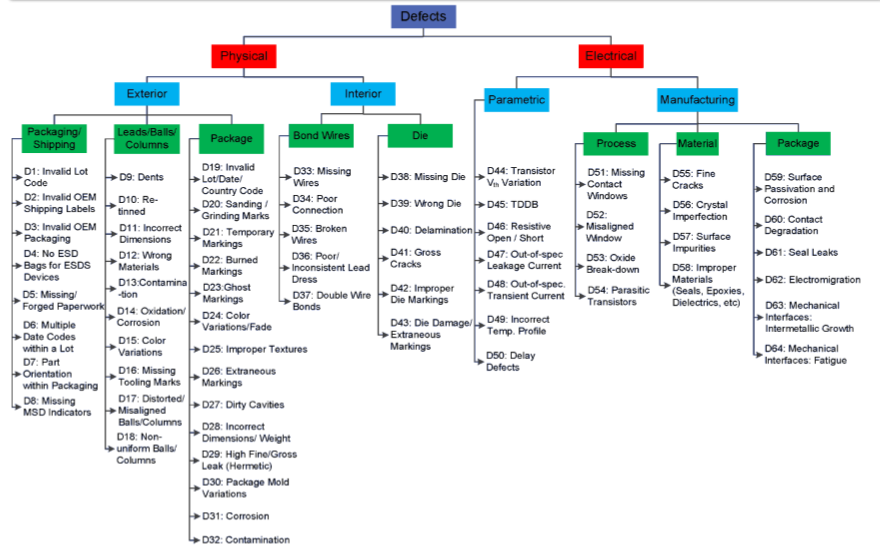