These devices are integrated mechanical elements, sensors, actuators, and electronics on a common silicon substrate, created through micro-fabrication technology.1 "Microelectronic integrated circuits can be thought of as the "brains" of a system and MEMs augments this decision-making capability with "eyes" and "arms", to allow micro-systems to sense and control the environment."1 MEMs are manufactured from silicon, polymers, mirrors, and metals (such as gold, nickel, aluminum). Applications include airbag controls, inkjet printers, optical switches, gyroscopes.3

Think of MEMs as a system on a chip.

MEMs are impossible to perceive by the human eye. Millions of these machines can be placed on a single silicon wafer: around the size of a grain of pollen,2 MEMs components range between 0.001 to 0.1 mm and the devices themselves generally range in size from 20 micrometers to a millimeter.3

Due to MEMs' large surface area to volume ratio, surface effects such as electrostatics and wetting dominate volume effects such as inertia or thermal mass. Electrostatics is the phenomena resulting from stationary or slowly moving electric changes.4 Wetting is the ability of a liquid to maintain contact with a solid surface.5

Richard Feynman, an American Physicist, discussed the MEMs concept in his famous 1959 lecture "There's Plenty of Room at the Bottom."3 At the time of the lecture, the technology did not exist to fabricate such a device.

Designs for MEMs have now gone as far as building an entire steam turbine power plant on a chip. 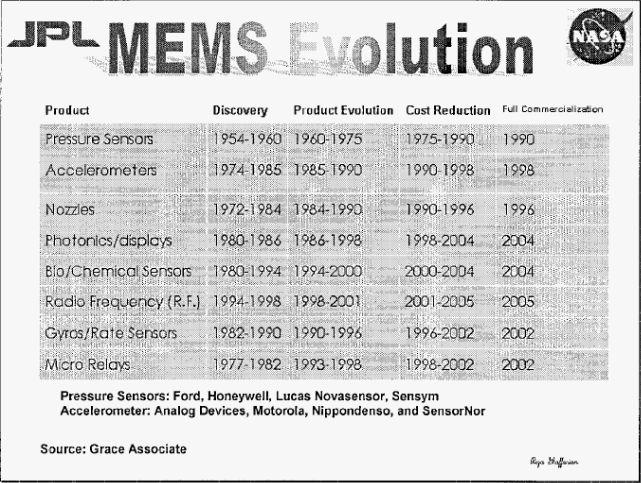 QUALIFICATION AND RELIABILITY FOR MEMS AND IC PACKAGES