There are many different kinds of control charts. Some use attribute data, others use variable data, and others use a combination of both. Before learning about the types of charts, we need to understand the difference between variable and attribute data:

Defect: a specific item of a product that fails to meet a specification or expectation.

Defective: an entire product with one or more defects which would be deemed unfit for customer use.  This product should be scrapped or reworked.

Fraction defective: the number of defective items/total number of items (\(p = x\) out of \(n\)).

Each point on the graph represents a subgroup, that is, a group of units produced under the same set of conditions. For example, if you want to chart a particular measurement from your process and you collect and measure five parts every hour, your subgroup size would be 5.  Normally a subgroup would be of a fixed or constant size.

Variable control charts for subgroups include the Xbar, R, s, and Zone charts with some examples shown below. 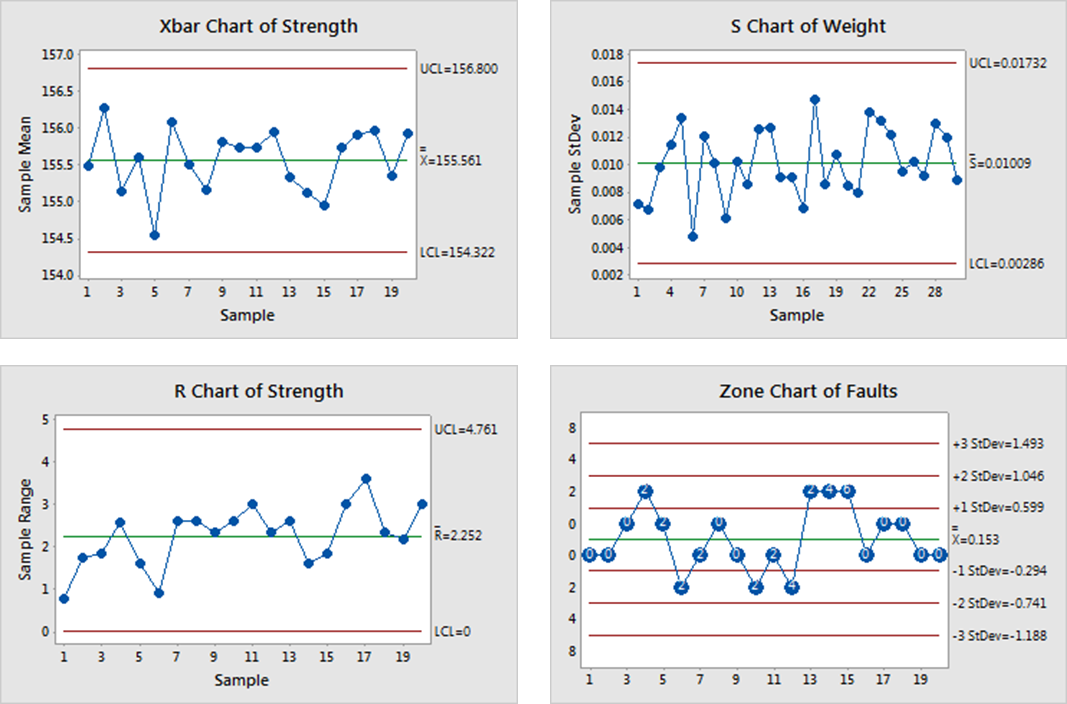 Xbar chart - Plots the process mean over time. Used to track the process level and detect the presence of special causes affecting the mean.

Zone chart - Plots the cumulative scores based on "zones" at 1, 2, and 3 standard deviations from the center line. Used to detect unexpected variation.

Each point on the graph represents an individual measurement, that is, the subgroup size is 1. Individual charts are used when measurements are expensive, production volume is low, or products have a long cycle time. For example, they are used for destructive testing, such as tests of the impact strength of parts. These charts include I charts and MR charts.

I chart - Plots individual observations over time. Used to track the process level and to detect the presence of special causes.

You select your attribute control chart based on whether the data follow a binomial (number or proportion defective or nonconforming) or a Poisson distribution (count data on number of defects or nonconformities).

Values for binomial data are classified into one of two categories such as pass / fail or go / no-go. Binomial data are often used to calculate a proportion or a percentage, such as the percentage of sampled parts that are defective.

You can use either the P chart or the NP chart to plot your nonconforming units. The main difference between P and NP charts is the vertical scale.

The chart that you choose does not affect which points are out of control.

When the subgroup sizes are different:

The varying center line may make the chart more difficult to interpret. A rule of thumb is to use a P chart if the subgroup sizes are different. However, you can use either chart. 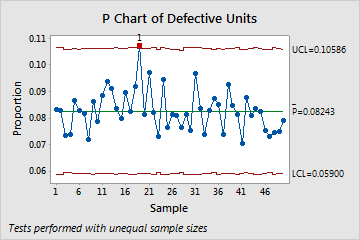 With a P chart, the center line is straight. 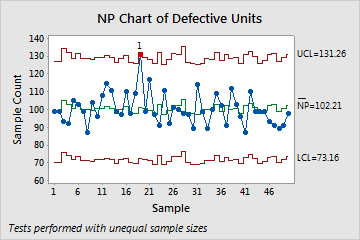 With an NP chart, the center line varies with subgroup size changes.

You can use either the U chart or the C chart to plot your number of nonconformities or defects. The main difference between U and C charts is the vertical scale.

The chart that you choose does not affect which points are out of control.

How to Select a Control Chart