How does the PDCA Cycle work?

PDCA includes a four-step activity set-pursued for improvement (Figure 14). Depending on the subject, the first step, PLAN, focuses on how to analyze the current situation and make a plan for increasing the performance of the system or process. The second step, DO, is the step in which activities are performed sequentially by the plans done in the previous step. CONTROL is the step to make sure that every action determined in PLAN has been done as planned. ACT step is for the activities that will be done if there are any unintended gaps between the PLAN and DO steps. 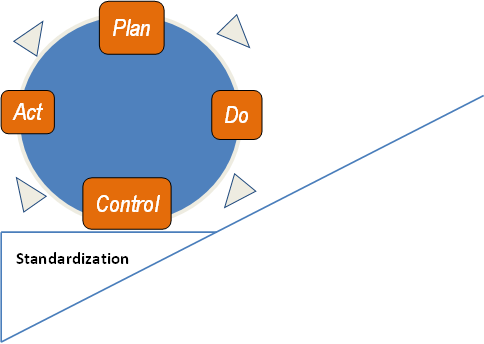 As with the QCs and other similar teams, PDCA is applied not only at the process, team, or departmental level; it is also utilized in organization-wide continuous activities. PDCA is a process in which new standards are established, revised, and subsequently replaced with newer and improved standards (Imai, 1986). As a requirement for continuous improvement, new objectives should be seen as improvement opportunities to reach higher performance levels. Expanding on PDCA, SDCA is the process in which standardization is implemented, and processes are moved to upgraded levels. Imai (1986) emphasizes that SDCA is used for stabilizing and standardizing conditions and PDCA for improving them.